I'd considered for some months to replace my ancient, nigh on fossilised PC that I used for Rekordbox.
Now to be fair, the old girl was not to be sneezed at, even though it was a 6600K, it was water cooled and clocked to 4.2ghz, it also had 16GB of DDR 4 (2400mhz) RAM, NVMe, all on an X370 mobo, and I also used it as a NAS. So plenty of storage.

Looking at upgrades, I'd be spending around £500+ for a new CPU and cooler, Mobo and possibly RAM. I could cheap out and save a fair bit of cash on the CPU and motherboard, but I build to last and my last one did - 5 years and still going strong, so the new machine had to last too.

Then I heard that the M1 Mac Mini was performing seriously well, so well, that being a proper computer geek, I had to have one and it would replace the old girl.

Now it was all pretty simple to setup, I even have it boot to an external NVMe drive, thus sparing the soldered internal drive. But there was a HUGE issue, in the rush to get out the new M1 Mini, and a new operating system, Apple introduced some serious bugs with sound controllers and midi, the life blood of Pioneer software and hardware. It wasn't until February 2021 that we finally saw Apple patch their mistake and Rekordbox update the drivers for the DDJ 1000.

Then another serious problem occurred, at least for me, I couldn't install the new Rekordbox drivers on the external drive, and after a weekend of retrying, calling Apple 1st and 2nd line support, wiping both the internal and external drives a couple of time, I came to the realisation, I had no choice but to use the internal drive for Rekordbox. I'd prefer not to do that, once the internal drive dies, the Mac is a paper weight and nothing more.

For daily use, I will use the external NVMe, for things like a NAS and plex server this would be fine. Booting back to the internal for Rekordbox, then when I'm done, back to the external. It's a pain, but it does work.

While I was waiting for the necessary fixes, I ran my music collection through Mixed in Key, and while it not a huge collection of music, it's still 10GB and it only took a couple of minutes. Yes literally just 2-3 minutes to analyse, key and cue all that music. That's a lot faster than my old machine, so I copied all my music back to the old machine (a clean copy of my music) and ran Mixed in Key on it again. This time it took around 4 minutes. So yes a fair bit slower. I tried again with a clean RB installation, and this time it took 30+ minutes. Of course RB does more but still... that's a long time.

Of course I had to do the same on the M1 Mini, and it took about 10 minutes to analyse the whole lot. Both machines accessed the music via USB SSD's, both USB 3.0, both had clean music to work with. What's more impressive? The Mac Mini M1 does this using Rosetta 2, software that converts x86 instructions to ARM, two VERY different CPU architectures. If the mini had access to an ARM built Rekordbox, then it could probably do it much faster.

Even though the Mac Mini M1 is slightly hobbled with Rosetta 2, to be fair, it can't run x86 code without it, it feels slick and smooth, buttery smooth. Everything you ask of it it just does in that snappy fashion you need it too, nothing lags, no long pauses, no click and wait for something to happen, it just happens right away. Coming from what was a pretty damned good CPU even now, that's not an easy thing to achieve, but it does and it also does it at an incredibly low power use of just 20(ish) watts. The 6600K can consume upto 120 watts for the same task. So yeah, better, smoother and cleaner response from 1/5th the power consumption.

To be fair to the M1 Mini, it can't really game, it's not built for that, it's built for internet use, office use, server use. It's not built to game hard like a PC. It can game, just no where near the same level. So if that is your thing, you really need to look at a PC. That being said, I've downloaded and played a few Apple Arcade games, and because they're built for ARM, they run seriously well. Even at 4K 60FPS! The games are great fun too. They're not Call of Duty or Battlefield or CyberPunk 2077 gorgeous, but they play well.

So overall it CAN DJ. It CAN Game as long as they're Apple Arcade Games or indie games from Steam. It can NAS. It can also do a cracking job of streaming Plex around the home too. It can mine hashes too, at 2300H/S

So as long as you have reasonable expectations, yes it can, and it can do it faster than most desktop PC's and laptops, and this is just the M1. Just wait for the M1X
I only wish Apple had made it upgradeable and not replaceable. I really would love to see this machine with 16GB of RAM.

This is my NAS server 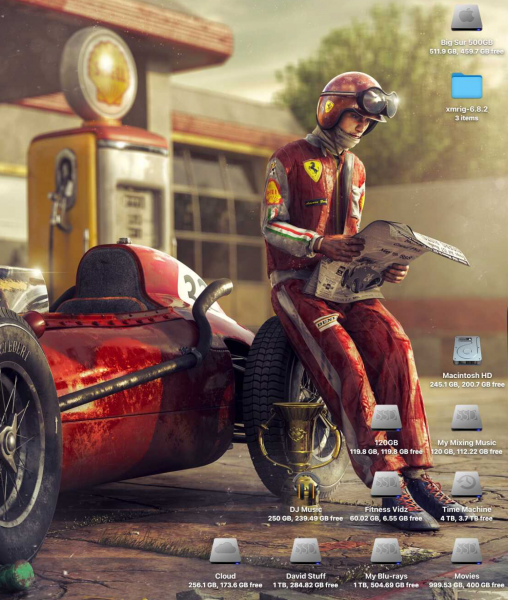 I've just had a very strange problem with Mac OS. Using SFTP on my windows desktop I downloaded some files from my server, but I sent those files directly though SFTP to my Mac Mini M1 through SMB.
It may seem a little long winded, but my Mac Mini is actually my NAS as well as my DJ station. Plus it's upstairs and I was downstairs where the SFTP app was installed.

So the issue I noticed was this seems to waste an enormous amount of space. I downloaded 30GB of files and the transfer consumed... 500GB+ of disk space on the drive I was transferring the data too.
The only way to resolve it was to remove the folder I copied the files too on the Mac Mini (NAS).

To prevent this again, I copied the files to my Windows PC, then copied them back to the final destination folder on the Mac Mini. Sorted. No more wasted space.
It's not the first time this has happened, so it's definitely something within Mac OS causing it.

I'll try and do it again and replicate it, then see if I can track down these wasted files, I can only assume it's some sort of caching system bug. So I'll need to show all hidden files and folders on the Mac Mini.
https://www.mixcloud.com/DJ_Dazbo/
https://www.twitch.tv/daz_the_old_dj